Folding- the end of the Gears 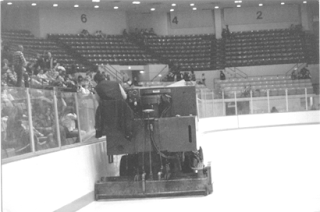 I find this a good place to cover the end of the Saginaw Gears IHL club. In all 224 players wore Gears uniforms. Some went on to the NHL and some decided to make the city of Saginaw their home. No matter what, the Saginaw Gears do not represent the end of hockey in Saginaw, but rather the begining.

In the spring of 1977, hockey fans all over the nation flocked to theaters to see the new hockey comedy movie "Slap Shot" and most were struck by how close that film was to the reality of real grass-roots hockey. The film depicts a minor league professional hockey team facing its end in the wake of the closing of the town's steel mill. In one particular scene, player-coach Reggie Dunlop's estranged wife, Francine, quips about the closing of the steel mill and its effect on the town and the team,

"...these people are going to be broke, they're not going to hockey games!"

As we who were the fans of the Saginaw Gears watched the big-screen spoof of our beloved sport, we laughed at every punch line and every punch. At one point in the film the fictional Charlestown Chiefs were even shown playing a team called the "Gears". Considering that no other team in hockey had ever been named "Gears" other than our own Saginaw Gears, apparently the movie's writer, Nancy Dowd, had used our home team as a part of the story. When the film concluded we left the theater with light hearts and happy thoughts. The fictional Chiefs had won their season championship and our own Gears were well on their way to their first Turner Cup. Little did we know at that time, that we had just been given a look into our own future as well as the future of the Saginaw Gears.

When Wren Blair first arrived in the Saginaw area in the winter of 1972 one of the common local sights that would have greeted him would be the parking lot of the Saginaw Steering Gear plant, the namesake of Saginaw Gears. That simple parking lot is important to us because it is a metaphor that demonstrates why the team thrived and why it died. In 1972, that factory's parking lot was absolutely filled with employee cars, 24 hours a day, every day, year-round. By 1983, due to the national recession, decline of the American auto industry and greatly increased use of robotics to do the jobs that were previously done by people, that same parking lot was nearly empty, 24 hours a day, every day, year-round. Shortly there after, the Saginaw Steering Gear logo was removed from the plant as new owners moved in and took over the business. The same socioeconomic factors that caused the extinction of Saginaw Steering Gear, also caused the end of the Saginaw Gears hockey team.

From 1980 through 1983, mass unemployment swept through the Saginaw valley. The deep recession that had been, in part, triggered by the dumping of foreign cars and steel on the United States markets as well as inaction by the Carter administration to curb either that dumping or inflation of prices nation-wide had sent the country into an economic tail spin. Hard hit were the small industrial communities such as Saginaw, Flint and Port Huron. Reggie Dunlop's wife was right, these people were broke, and they were not going to be able to afford to go to hockey games. Attendance at the Gears games began a steady decline. To make matters worse, those like me who could move from the Saginaw area to places, such as Texas and Florida where there were jobs, did so in a great wave of expatriates. A common bumper sticker of the time said "Will the last person to leave Michigan please turn the lights out." As attendance at the Gears games dropped, the team's management saw revenue take a sharp dive, and they reacted in exactly the wrong way- they increased ticket prices to off-set the red ink. Half way through the final season Al Blade, one of the founders of the Gears who had subsequently moved on to the Detroit Red Wings, paid a visit to the Civic Center during a gears game. He stood of a long time and talked with my dad, Walt the Zamboni driver. Dad recalled that they talked about the franchise doing badly and how the end may be near. My dad said that Al scanned the arena and noting the mostly empty seats he said "The problem is, they gotta fill this barn." Then he turned to Walt and asked how much a ticket cost. Walt told him and Al agreed- the end was in sight. Between the team suffering their worst season since 1972-73 and the over-priced tickets in a poor economy, the fan-base dissolved and the team had no choice other than folding.

This image is of one of the final programs from the final game of the final season. Notice that it says "See you next season!" on the bottom. Ironic, isn't it. 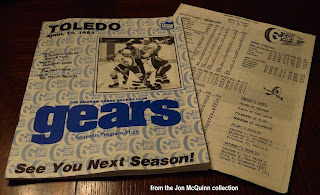 Following the Gears the Colonial Hockey League skated a team in Wendler Arena called the Saginaw Wheels. Thereafter the Saginaw Generals played on Civic Center ice coached by Gears great- Dennis Desrosiers. The Saginaw Hawks followed for a couple of seasons as did the Lumber Kings, but no team seemed to take root like the Gears did... that is, until the Saginaw Spirit. From 1999 until 2002 hockey was largely not among the passtimes of the tri-city residents. Then came the Spirit. The junior team was launched with a savvy and vigor not seen since the launching of the Gears in 1972. I bought my dad season's tickets for the first year of the Spirit games- he loved it! I was only able to make it to one game but what I saw was terrific. Tons of fun, shirt give-aways, puck-throws, a radio-controlled blimp that bombed the crowd with gift certificates, and lots of great hockey. More than a decade later, the Spirit are still going- and I hope it stays that way.
Posted by Wes Oleszewski at 10:04 PM