I would not trade those days for anything

By Jon McQuinn
For SaginawGears.com 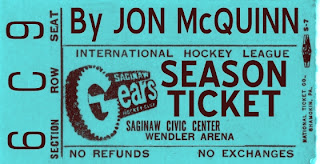 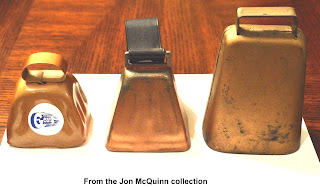 Pictured nearby is a photo of three bells. At left is the bell that was sold by the Gears at souvenir stands in the arena. This was a small, steel bell with a bent metal hook attached inside to provide the noise. I always looked upon this style of bell as lame, but a lot of people used them. The bell in the center was a notch up from the “official” bell, and used a small, solid, round piece of steel for a clapper (imagine a good-sized fishing sinker). This specific bell was the one used by my mom for several years, and it worked just fine in the volume department. Finally, at right was my weapon of choice at Gears games. My “middle” brother (there were three of us) was always working on street rods and drag-race cars, so he always had ready access to steel, and he also did a lot of fabricating and welding. A 1972 graduate of Arthur Hill, he began employment at Saginaw Steering Gear later that year. He’d work the ’B’ shift at Steering Gear’s Plant 5, get out about midnight, then spend a few hours at a buddy’s garage working on cars. One morning, I walked into the kitchen to see this bell on the kitchen table. It was in the shape of an actual cowbell, but in about 1/3rd scale. Everything – the body, the handle – had been formed and welded by my brother. Inside, he opted for a ½-inch nut for a clapper, and the noise was deafening.
I still use this thing from time to time to awaken my 16-year old daughter on school mornings when her alarm clock is having no effect. Trust me, the bell works much, much better than the clock.
Another popular noisemaker back in the early days was the air horn. These were much more expensive than a cowbell, and so were most often used by adults. These are the horns found in boating supply stores for the purpose of seeking emergency help in times of distress on the water. Put another way, if you can hear these air horns from three miles away on Saginaw Bay (which you can), imagine the sound within the confines of Wendler Arena. Now, imagine 100 or so of them blasting in unison after a big Gears’ playoff goal. I received a small version of the air horn as a gift in 1973. I took it to a game for the first time, blew it a few times when the Gears skated onto the ice, blew it a few times after the Gears scored their first goal, then realized I’d already emptied the canister of Freon. Upon learning that replacement canisters cost about as much as the original horn, I returned to the cowbell.
From the time I first bought season tickets until the last couple of years of the Gears, I usually ate dinner at home, then bought a Coke and a box of popcorn at the game in the second period. But not just ANY time in the second period. Sometime during the 1977-78 season, I was waiting for a stoppage in play to get my Coke and popcorn, and when the whistle blew, I looked up at the clock and the second period – thus, the game – was half over, with exactly 10 minutes showing. The Gears, who had been trailing that game by two goals, came back and won. So, from that point on, I waited until the first whistle after the 10-minute mark of the second period to make my snack run. I always went to the same concession stand, one located at ice level just beyond the glass and underneath Section 11.
Later, my schedule became more complicated with work and school, and I often didn’t eat supper on game nights until I got downtown. McDonald’s had opened at the corner of Washington and Johnson by this point, so I’d often get downtown maybe 90 minutes before game time, walk over to McDonald’s, and have dinner before walking back to the arena. This was also the plan of several IHL teams who were in town to play the Gears. I still remember standing in line with Paul Tantardini in front of me, Dirk Graham behind me, and a lobby full of Toledo Goaldiggers all trying to grab a Big Mac or a Quarter Pounder before walking across the street and going to work.
Thirty years have passed since the Gears closed up shop, and of course change is a constant. Don’t bother looking for the Radisson Hotel or the Downtown Saginaw Mall anymore, for they are gone, their sites now parking lots. Don’t look for Baum Street in that area either, because it only goes as far north as Genesee  My old concession stand, the one where you could watch the game while waiting in line, was closed during a remodeling project prior to the arrival of the Spirit in 2002. The IHL is gone, the Gears and ‘Diggers are gone, and that McDonald’s store even closed its doors in January, 2008 (the old restaurant site is, drum roll please . . . a parking lot). And almost two years to the day before that, on January 9, 2006, Paul Tantardini, as fearless a player that ever laced up the skates in the IHL, took his life, jumping off a bridge into the Maumee River, not all that far from the Toledo Sports Arena where he played so many games.
But those 11 years of watching the Gears? That was time well spent. That team and my youth are forever intertwined. I would not trade those days for anything.
Posted by Wes Oleszewski at 6:15 PM