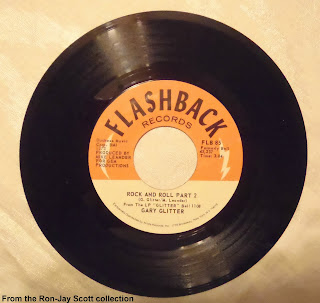 Seen here is a 45 rpm copy of Gary Glitter's Rock and Roll Part II....better known to us as "The Gears Theme."

The song was originally released in August of 1972 on the Bell record label....was charted on the Billboard Top 100 list for 9 weeks....highest chart position was #7 in the nation. But all of that was prior to it's other success beginning a few years later in Saginaw and eventually spreading across the nation if not the world.

This picture is of the promotional copy of the tune that the Gears, with WSAM's help, had made as a give-away one night. As best can be remembered, 1000 copies were given away at a game and WSAM got some additional copies to give away on the air. Bell Records apparently had gone out of business or sold the licensing rights at that point, hence the record is on the "Flashback" label...whoever the heck that is.