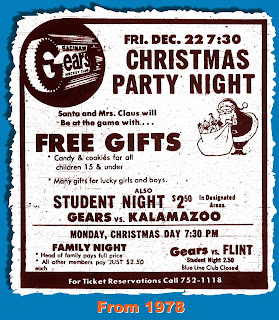 I figured that since I'm writing this in the Christmas season- I may as well add some spirit from a Christmas past...

I had only been home from college in Florida for a week when the Gears "Christmas Party Night" took place. These were always somewhat strange affairs as far as most of us were concerned. Marge Perry directed the whole thing and Santa was usually stationed at ice level in the corner directly opposite the locker rooms at the Zamboni alley end of the rink.Several times in the history of the Santa game he was almost nailed by stray pucks and one time a clumsy fan tumbled out of the seats directly overhead and landed right smack in Santa land.

On the evening of the December 22nd, 1978 "party" my brother and I went into the Civic Center with dad early and had the rink to ourselves for skating and shooting. Of course we had to walk the nets and shovel snow after the re-finishing to pay our way too, but it sure beat the pressure of flight school for me. All that I have in my notes about the game is "...Gears won." But there was skating after the game as well and it was a good night.

The Christmas day game was always a sort of abbreviated deal. Most folks wanted to stay home and enjoy the day with their family and had suddenly realized how much money they had spent during the season- so there was not a huge motivation to head down to the Civic Center. My Dad gave me a really nice pair of winter gloves for a gift... apparently he had forgotten that I was living in Florida! We laughed about that and he said I could return them and keep the cash for feeding myself down at school... which was exactly what I did. Of course at our house if the Gears were playin', Dad had to be on the Zamboni drivin', so we all were there together on Christmas day. Of course the Blue Line Club was closed because of the holiday and that sucked. Plus there was no free skating after the game- and that sucked more. Sure, I got in my pre-game skate and had the arena all to myself for about 20 minutes, but no Blue Line Club?

Yet the day came off to be very merry as the Gears beat the snot out of the Flint Generals 7-4 and Christmas cheer was in the building as we all left that night.

Still sucked not to have the Blue Line Club open... *sigh*