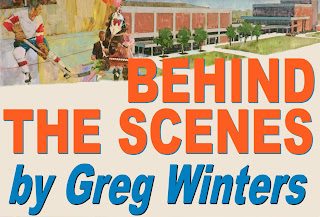 I worked at the Saginaw Civic Center from 1977 through 1979 and was involved with the ice rink on a daily basis for the Saginaw Gears for each of these hockey seasons – cleaning locker rooms, setting up and tearing down the rink boards and glass, cleaning the seating areas, etc.  I also acted as ‘event manager’ on a number of occasions as the spot was rotated between all of the senior Facilities Attendants who worked at the Civic Center and Wendler Arena.  All of this provided me a number of wonderful memories of the Gears and the goings-on there.

My earliest memory of the Gears was when I performed in the Saginaw Community Youth Band for the Gears’ home opener in October of 1973.  We certainly witnessed the classic “I went to the fights and a hockey game broke out” evening, that’s for sure.  It was my first time ever attending a, er… ‘professional’ hockey game, and I didn’t know what to think.  Still, the evening was a blast and the noise that only just over five thousand people could make was great to experience.

Being an event manager at many of the Gears’ games allowed me to witness a number of interesting events during the games that those who were regular attendees (such as season ticket holders) got to see all the time.  I remember seeing for the first time the infamous Don Perry ‘chorus line’ – a nickname given to the players who were on the Gears bench who, when there was a massive ‘all-hands’ fight going on out on the ice, would all have one leg draped over the boards waiting for the signal from The Don to rush the ice for the typical all-out bench clearing brawl.  I know there is a photo of this somewhere because I remember seeing it published in The Saginaw News.

I recall the famous Flint Generals-Saginaw Gears Hatfields vs. McCoys slugfests coming out of the rivalry between the two cities.  One in particular (of which I have a copy of the News article with a photo) saw Generals players going up into the stands to take on drunk Saginaw fans in a couple of sections near the locker rooms entrance at the northwest corner of the rink.  A couple of the Generals used the vending machines located next to the pull-out seats to climb up and into the mezzanine area to duke it out with a few guys who had poured beer on them as the players were making their way to the locker room.  Later that evening, when cleaning up after the game, we marveled at all the puncture ‘wounds’ in the vending machines from the players’ skates.

Although the brawling at Gears games was legendary (to this day, old timers still debate which rivalry was the most vicious:  Gems?  Goaldiggers?  Generals?  Komets? – you could argue for any one of them), my favorite nubfest rivalry belonged to Don Perry, coach of the Gears, and Ted Garvin, coach of the Toledo Goaldiggers.  Perry was well over six feet tall, slim and muscular, and Garvin was a short, squat little guy- half as tall as Perry, but every bit as strong.

I’ll never forget watching Perry and Garvin duke it out at center ice one evening.  There had been one of those typical bench-clearers (including the ‘chorus line’), but this one was blazing along decidedly more fierce than most.  The refs simply couldn’t put out the fires being set on the ice fast enough.  Well, Perry and Garvin came to the rescue.  They had been jawing at each other all night, especially while the war was billowing between and betwixt the skates and gloves on the ice.  Finally, they tumbled out of their respective players’ benches, grabbed each other and slid to center ice in their dress shoes, and proceeded to flail away at one another.

The fans went wild, laughing and egging them on.  One by one, the fights on the ice stopped with the combatants holding each other like dancing partners as they stared with jaws dropped at the Mutt-and-Jeff spectacle going on in front of them.  Perry lands a left and Garvin takes it!  Garvin lands two to the midsection!  Incredibly, despite being in street shoes on slick ice and absorbing full-throttle punches, neither man toppled – it was amazing.

The refs stood aside, equally as stunned, then looked at one another wondering what they should do.  Finally, they grabbed the respective teams’ captains and rushed over to break it up, but the story doesn’t end here.  While Perry and Garvin continued to shout at one another (while their players restrained them, barely able to contain their laughter), the refs huddled and decided to throw Ted Garvin out of the game.  Well, Garvin went berserk, broke free from his players, and began ‘skating’ all over the ice shouting and gesturing.  The refs skated after him like a band of keystone kops – it was hysterical.  The crowd was beside itself – I had never witnessed anything like it.

Finally, the refs managed to grab Garvin and they all huddled again.  Strangely, Garvin suddenly broke free from the huddle and shuffled off the ice toward the locker rooms to the loudest chorus of boos I have ever heard in my life!  However, we soon learned the reason he was so suddenly placated.  Like saddened pall-bearers, the group of refs came over to Don Perry waiting by the players’ benches to tell him the bad news:  he was ejected, too.  Perry protested vigorously for a short time while the crowd continued to loudly boo, but then – head held high and proud – he, too, made his way across the ice to the locker room to the loudest chorus of cheers that I have ever heard in my life.  The whole thing was awesome.
As a side note, Don Perry was dead serious about the ‘art’ of hockey fighting.  Evidently, he had built himself up the reputation of being a guru of the practice from his playing days, and when new players would come to the Gears, this was one of the first things the veterans told them about their new coach.  It is said that Perry’s belligerent approach to the game was what cut short his NHL coaching career when he got his break with the Los Angeles Kings.

Perry used to hold ‘fight classes’ during practice.  He would stand in the center of a circle of players, first lecturing them about a technique or two, then calling them out one by one to ‘fight him.’  We’d stand around and watch as Perry showed the players what they were doing wrong and how to correct it.  Other times, Perry had two players walk through a choreographed fight while he critiqued it for everybody.  I never knew that there could be so much to the practice of fighting on skates, but after observing a couple of these clinics from The Don, I was convinced.

Perry showed the players how to position their feet, how to look for that opportunity of ‘lifting the jersey,’ how to effectively use an uppercut when your opponent is flailing away with cross-punches, where the ‘soft spots’ were in your opponent’s pads, etc.  Perry could’ve written a book, but the results showed.  The Gears under Don Perry were always an excellent fighting team, and I’m sure many of the players carried these skills along with them to the big league.
Posted by Wes Oleszewski at 8:30 AM