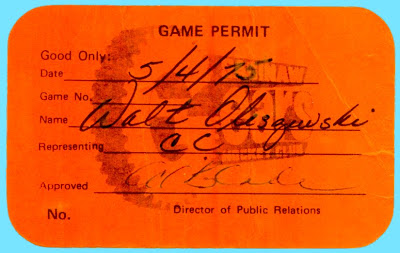 This is a pass to permit access to the Gears game during the 1974-75 Turner Cup finals. Note that it was signed by Al Blade. Although it was issued to my dad, it was actually intended for my mom or my sister or my little brother. They, like other Civic Center families, were seated in a an extra little riser that was erected near Zamboni alley just for "CC" families. Since those seats had no designation because they were just set up as a special area, there was no way to print tickets for them- so the team accounted for them with these "permits." Oddly, no one actually "took" the passes, because none of the ticket takers were on duty when the pass holders arrived in the building... we just walked in with my dad. I didn't need a pass because I was working the game as an usher. My position, at this point in the season, was at the gate that led up to the press box. What a SWEET job! Sure I only earned $1.65 an hour, but I got paid to stand there and watch the game! So what if I had to wear one of those dumb orange coats.

Did everyone that remembers the Gears know that the Turner Cup team is being inducted to the Saginaw Sports Hall of Fame next week? And there are several of the players showing up....how exciting