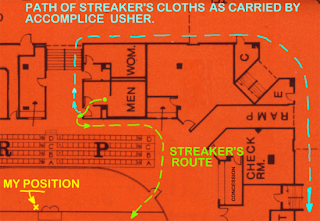 THE STREAKER CONSPIRACY... THE INSIDE STORY part 2
The plan was amazingly complex, took the absolute precise actions of no less than four teenage ushers and absolute secrecy both before and especially after the prank. Most amazing was that the assistant building manager and the Zamboni driver cooked up the whole thing four days prior, they had recruited their streaker the night before the game, inducted their co-conspirators just before the beginning of the first period and executed the plan before the end of the game! I will not reveal the full name of the streaker here, because I have been unable to contact him and gain his permission to publish his identity, but I will state for the record that it was NOT me, it was a fellow named Bob. The others involved included Walt's assistant Ollie plus, an usher named Pat, one named Bill and me. All of us, including the assistant building manager, knew without question that if building manager Bill Fifer got a clue as to who did this he would fire everyone without hesitation.
This is how the plan worked. Just before the break between the second and third period, Bob and Pat, went into the men's room at ice level at the east end of the arena. Pat hung an "Out of order" sign on the door and Bob undressed down to the bathing suit that he actually would be wearing beneath the towel. Bob's usher's uniform and other clothing was placed into a simple black trash bag and given to Pat. They filled a sink with hot water and soaked Bob's sneakers in it. This was done because hot sneakers will stick when they hit the un-refinished ice and there would be less chance that Bob would slip and fall. Then Bob safety-pinned the towel around his waste, and they waited for their cues. When the buzzer went off signaling the end of the second period, it also signaled Pat to leave with Bob's clothing in the trash bag and head for the trash compactor room at the opposite end of the arena where he would wait for the streaker. Meanwhile, Bob's cue was to watch for when Bill and I took the net off of the pegs out on the ice in preparation for "He Shoots, He Scores." At that moment, Bob lowered a goalie's mask, (which by the way belonged to my younger brother) over his face and dashed for the ice.
Posted by Wes Oleszewski at 10:33 AM