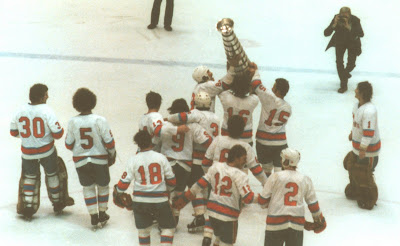 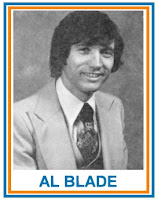 Recently, while attending a Saginaw Spirit game I had a little, fun story related to me by Dennis Desrosiers.

It was the morning of May 12, 1977- the day after the Saginaw Gears had won their first Turner Cup. It was also the morning following one of the largest celebrations that I had ever seen in my life and it was likely so for Dennis Desrosiers as well. As acting team captain, by tradition, Rosie was the player in charge of the cup right after the game. As the heart and soul of the Gears, he was also one of the folks with the right to celebrate the most, so when he was awakened that morning (which, if he was like the rest of us- it was closer to noon) by the shrill ringing of his phone he was in a heavy fog. On the other end of the phone was Director of Sales and Public Relations for the Gears, Al Blade. Now... everyone reading this who does not know, should know that the only thing sharper than Rosie's skates, is his sense of humor. In fact he has one of the most wickedly keen senses of humor that you will ever encounter. The following is a paraphrased reproduction of Rosie's account of how that conversation transpired...

Blade (in a near panic) asked, "Rosie! Where's the cup?! Nobody can find it!"

Rosie (looking at the Turner Cup sitting right on his living room floor) answered, "What cup?"

Blade replied with something like "The Cup, the Turner Cup! Nobody knows where it is, we can't find it!"

Blade who was probably in the same fog as everyone else who had been in the Blueline Club the previous night came back with something such as, "Awww come on... don't do this to me, where's the cup?"

Rosie replied as if totally blank, "I donno' where the f#%kin' cup is."

Blade pleaded that this was serious, no one knows where the cup went.

Rosie kept it up, "I donno where the f#%kin' cup went, I thought one 'uh you took it last night."

Blade cautioned "You better not be pullin' my leg here, this is serious, where's the cup?"

Rosie kept Blade on a nice set of pins and needles for a protracted length of time. About then Rosie's roommate Dave Westner walked in.

Rosie went on, "Wait a minute, Westy just came in, le'me see if he knows." Pointing toward the cup, Rosie winked at Westner. "Westy, Al's on the phone- wants to know if we know where the Turner cup went, they can't find the f#&kin' thing." Westner, of course replied that he didn't know where the cup was. "Nope- he says he doesn't know where the f#%kin' cup is either."

Just how long Rosie and Dave kept jerking Al's chain or how many other calls took place that day, Rosie didn't tell me. Dave, however, added how much fun they had with Al Blade that day:

"We had him (Al Blade) on the merry-go-round - we told him the 'cup' left with someone during the course of the early hours, can't remember who."

One thing is for sure, knowing Rosie as well as Al did, he should have known better than to call on phone and set himself up like that for one of Rosie's practical jokes. The night that Rosie told me this story I stood on the stairs of section 30 of the "Dow Center" and laughed so hard, it is a sure bet that some of the Spirit fans must have wondered what the heck Rosie was telling me. In fact I giggled about it all the next day, while on the drive to Metro Airport, on the flight to BWI and on the drive to my house. Thanks Rosie!

Dave Westner later told me that his dog ate breakfast out of the cup that same morning.