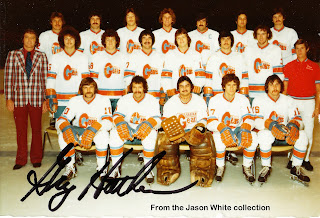 This team photo was sent to us by a Gears collector. He has it for the autograph of Greg Hotham, but I found it interesting because of who is in it, who is missing, and what everyone is wearing.

First off, the team is wearing the uniforms from the 1975-76 season. These were lightweight knit jerseys that had a sort of iron-on plastic stripes, numbers and team logo. The same was true of the socks worn in that season. Although these uniforms were cheaper than those with the sewn-on numbers and logos, they were also... well... to put it bluntly... cheaper. By that I mean that after multiple washings and drying needed to keep the uniforms somewhat clean, the iron-on logos tended to crack, peel and simply fall off. From the 1976-77 season onward, the team returned to the heavy-duty sewn-on adornments. So, by looking at the photo, you may conclude that it is of the 1975-76 team- and you would be wrong.

Some of the players in the photo were not even in Saginaw in the 1975-76 season. The player whose autograph appears on the photo, Greg Hotham, was playing for the Kingston Canadians when the Gears were playing in their iron-on jerseys. Mike Ruest, seen on the right end of the back row, was playing for the Oklahoma City Blazers that season. So the wrong players are in the wrong season's uniforms.

Lastly, look at the goaltenders... or rather... look for the goaltenders. There is no Mario Lessard, Saginaw's prized goaltender from the autumn of 1974 to the spring of 1977. There is also no Harvey Stewart or Tom Mohr, both of whom played second string to Lessard in this era. Instead, there's some guy with beads. That goalie with the beads is the clue that helps us reason out this photo. His name is Jim Fraser and he played exactly 2 games with the Saginaw Gears early in the 1976-77 season. Note that he is wearing a jersey from the 1973-74 season.

Often, players are called upon to dress and pose at weird times for reasons they could care less about. In this case, we do not know the exact reason, but it was likely a pre-season session that required some players in uniform to look like the Saginaw Gears team. We can envision Gunner not having the new uniforms yet and tossing out the old uniforms to be worn just for the photo. This photo was not used in any official manner to depict the team in any season. So if you know the exact circumstances behind the image, let us know

UPDATE: A comment posted here indicates that "Tim Williams" is seen in the photo. Williams came to Saginaw in the pre-season of 1976-77 and was sent to Flint early on.
Posted by Wes Oleszewski at 10:03 AM

My uncle Tim Williams is in this picture. Second row with the mustache.