Making Ice and the Tricks To It 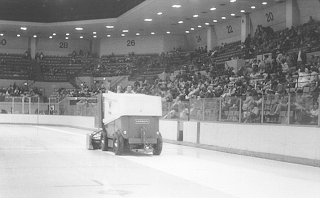 MAKING ICE AND THE TRICKS TO IT

There are many aspects of making ice and hockey games that most folks who buy a ticket and watch a game do not know. A good ice machine driver can, however, have a subtle impact on the game, simply by the way he conducts the re-finish. The ZAMBONI® ice resurfacing machine has a wide range of capabilities. It can shave the ice with a deep cut, called a "heavy shave" or with a very slight cut, called a "light shave." It can apply the water in amounts ranging from a small quantity to a heavy quantity, or in jargon terms a "light flood" or a "heavy flood." Additionally, the water used can be loaded as hot water or cold water each of which having its own outcome on the form of ice that is created. The results are that a heavy shave, using hot water leaves an extremely smooth surface and very "fast" ice. A light shave and cold water leaves a rough surface and "slow" ice. These two factors can be applied in the following manner. If the Gears have been on the road and played several games in a row, they will do better on very fast ice which can help to even the odds against an opponent who may have come off of a lesser schedule. Likewise, if the visiting team has played several games in a row or made a long bus ride or both, but the Gears were coming off of a rest, the ice can be resurfaced with increasing degrees of cold water and decreasing degrees of shave. That way Walt could deliver fast ice in the warm-up, slower ice in the first period, even slower ice in the second period and sand-paper ice in the third period, thus wearing down the "legs" of an already tired visiting team.

Indeed there were many times when the ice conditions were coordinated with the wants and needs of the team. Very often, the Gears trainer, Gunner Garrett, would come out before the game and give specifics as to what kind of ice the team would like for that game. Walt would then "set up" the ice as requested. This may seem like cheating, but in fact it is more of a hockey tradition than anything else.

Another aspect of ice making involves the coordination of the building engineer and the ice resurfacing machine driver. In this case the issue is one of Freon. The temperatures of the Freon as it leaves and returns to the compressors have much to do with the ice surface. A normal range is 19 degrees Fahrenheit out and 21 in, but these can be altered to give the ice slightly different characteristics. Higher in and out temperatures result in soft, slow ice and lower temperatures result in brittle chippy ice. Additionally, the atmosphere of the building itself has to be taken into account. If the game is being played in mid March in the depths of a blizzard, the crowd will be small and the building temperature will be low. If the game is one of the Turner Cup finals being played in early may with a sell-out crowd, the building temperature will be very high. Freon temperatures can be adjusted to cause the ice to assume different characteristics through each of these events. In the case of a spring season play-off game, the building will start out could and then warm up as the game proceeds. The Freon can be started at normal temperatures, and then kicked down to cause the ice to retain a consistent form as the atmosphere changes.

Posted by Wes Oleszewski at 5:51 PM