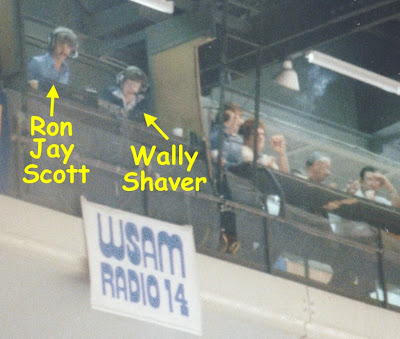 If you watch almost any sporting event, especially hockey, you will find that largely in place of the organ player in the rafters, teams are using big-beat "arena rock" as their pump-up music. Quite often teams use 70s glam rocker Gary Glitter's 1972 hit "Rock and Roll Part 2" as their pump-up song. Although the often inaccurate Wikipedia says that the use of Rock and Roll Part 2 started in Colorado in the late 70s- they are... wrong. It started in Saginaw- on Wednesday March 9th, 1977 and it was the brain-child of Gears announcer Wally Shaver.

To confirm this, without reading my personal journal written that evening, you can simply watch replays of any Colorado Rockies games prior to March of 1977. You will find that they exclusively use the organ in the rafters. Meanwhile, the Gears were finding a new source of motivation in "their song." When I got in touch with Wally Shaver in the early days of this web site, he was kind enough to offer the real inside story behind the way the song came to be used.

"I haven’t relayed this story very often but I certainly don’t mind letting everyone know that I made Gary Glitter more famous than he ever could on his own. Back in the 1975-76 season, we had a game in Toledo. I can’t remember the outcome, but what stuck in my mind was the electric atmosphere the Goaldiggers had created in that dump of an arena. Occasionally during stoppages in play, they piped in music over the P.A. system. This really inspired the crowd with a good hand-clapping, foot stomping beat. It was pretty cool. The crowd responded with great enthusiasm and it certainly jacked up the team.

On the bus ride home, Al Blade and I were commenting on the atmosphere the music created. We decided to research doing that ourselves. The arena said no problem; they could play music over their system. We decided we didn’t want to use the Goaldiggers theme song and needed to search for our own identity. I was giving it a lot of thought and listening to a lot of music to find something that would fit. I called my good friend Bill Courbier with WSAM radio, our broadcast outlet to enlist his help.

At the time, Gary Glitter had a song that was getting some airplay called “Rock N’ Roll Part II.” It got into the top 20 hit parade but not much higher. I told Bill, “We’re looking for something like that with a catchy beat; something fans can clap to; something with a lot of instrumentals that would allow a longer shelf life.” We discussed a few titles and decided he’d put a few songs on tape and get them over to me.

We listened to the selections in the office. Then I played them for the team on the bus on our next road trip. Rock N’ Roll Part II had a slight edge over the other tunes, but I had already decided this was going to be the one. We introduced it to our crowd and it was accepted right away. Thus, Rock N’ Roll Part II became our theme song. Visiting teams to Wendler Arena loved it, often complimenting us on how it revved up the crowd.

There was a marketing guy working for the Kalamazoo Wings, Kevin O’Brien, who left the K-Wings to join the Colorado Rockies of the NHL. He readily recognized what a crowd motivating tune this was and called to ask me if they could use it at their games. I said sure. From there, Rock N’ Roll Part II blossomed into one of the all-time great sports theme songs used in almost every arena and sport at all levels. "

On that March evening in 1977, Wally pretty much sprung the song on the arena as the team stepped out to start the first period. "Here come the Gears!" came the standard shout over the PA as the team came through the door, but instead of Doug the organist's usual music, Rock and Roll Part 2 thumped the crowd and the team. I recall the look on Dave Westner's face as he sort of gave that "what in the world...?" roll of his eyes toward the rafters. After about two circles around the ice, however, he was rockin' and smiling. The crowd began to stomp and clap in time to the beat and the place took on the pulse of a playoff game- but the playoffs were almost a month away. Muskegon, who were already on the ice, had no idea what was going on with the music. After every Gears goal, the song would pump through the arena and the Gears went on to clobber the Mohawks 8 to 4. 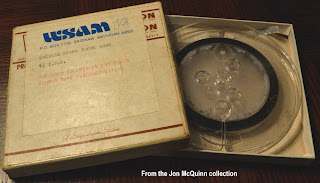 After the game while escorting my mom to the Blueline Club I ran into Gears color announcer Ron Jay Scott. "What was with the music?" I asked. He smiled big and asked back, "Did ya' like it?" My answer was "It really got 'em goin'." Ron Jay explained, "We were trying to think of some kind of bumper music that we could use that would fire up the crowd better than the organ and the team decided on the Gary Glitter song, Rock and Roll Part 2! So we decided to try it and see." My response was "It worked." It was very apparent that he'd gotten a ton for feedback from his experiment that evening and everyone in the Blueline Club was talking about it. With Rock and Roll Part 2 booming at every home game the Gears went on to win every one of the remaining home games and a total of 8 out of the next 11 games to capture the division title on March 27, 1977. That night, following the game I walked past the Gears locker room and could hear them singing inside the "Hey-yaaa hey-yaaaa" from Rock and Roll Part 2 the way only half-drunk hockey players can sing.

That same season the Gears took their song all the way to winning the Turner Cup and the song was played often on the local radio stations. WSAM, "the home of the Gears" played the song so often you'd think they probably should have sent a whopping royalties check personally to Gary Glitter, or perhaps it should be the other way around and maybe the royalties should be sent to Wally Shaver.
Posted by Wes Oleszewski at 4:39 PM