Those Rockstars from Kazoo come to town 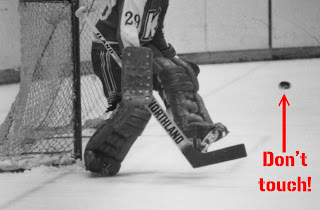 On the 9th day of October, 1974 a brand new IHL team came to Saginaw- the Kalamazoo Wings. In the build-up to the first game between the Gears and the Wings in Saginaw, we'd seen a lot of publicity. Assorted news bites on the local TV sports segments and a spots in the newspaper. The chatter on the radio was fairly intense- indeed they were looking to drum up a big crowd to see the new franchise.

At that time I was one of the "orange coats" or ushers working in the arena. My dad had gotten me the job and when hockey season began I was quickly assigned to ice level to help with the nets and the "He Shoots, He Scores" between periods event. Dad had just been assigned from head usher and Zamboni driver to full time in Zamboni alley, but he'd originally gotten me the job. Two of us worked the east rink door, me and another usher named Bill. Our job, although quite simple where the ice was involved, required some pretty good timing and hustle- especially under the scrutiny of "Walt the Zamboni driver." It made no difference that I was his son, if I screwed up and the game got delayed- I'd be reassigned to watching some outside door. We first had to wait until it was safe to open the door, i.e. no pucks flying about, and then go out, lift the net from it's pegs, then one guy would slide the net aside and out of the Zamboni's way while the other removed the pins, filled each hole with cotton and poured in alcohol to keep the holes from freezing up. You had a very few seconds to do this because as soon as you opened the door, Walt was on his way onto the ice with the Zamboni and ready to make the first pass and he could not stop or slow down. Bill and I worked as a team and had the whole task down to a science.

Now- let me add here that in a pro-hockey arena, pucks have zero value. They actually cost the team (in 1974 dollars) less than a penny each. Players shoot them into the stands during practice and no one bothers to look for them. It was not uncommon to come into the arena for a game and find a few Gears pucks as you walked through the seats. That said, the following incident with the Kazoo Wings staff can now be placed into context.

On the evening of the first game between the Gears and Kazoo, the Wings were doing their warm up and that was always on my end of the ice. When the horn blew and the last few shots were taken, Bill and I opened our door and proceeded toward the net. There were a ton of Kazoo Wings pucks still on the ice and the Saginaw stickboy was hustling to pick them up since Kazoo had not brought their own stickboy to do the job. Bill and I each snapped up a Wings puck and pocketed it as a souvenir- then went on with our work. When it was time for us to leave the ice, we were met outside by "Kay" our bobbleheaded head usher and two leisure suited slick-Os who were the K-wings broadcasters/PR dolts. We were immediately questioned by "Kay" as if we'd just held up a bank. Did we have Wings pucks in our pockets? Yes. Please give them to these men. We did, they acted as if we'd been caught stealing a car. "We want these two fired for stealing pucks!" the one jerk demanded. Kay, who hated me anyhow, began to cave and so I began to argue. This was nuts, these were hockey pucks for crying out loud. The Kazoonoids took on an attitude... apparently they thought they were rock stars or something. "I'm sorry boys but..." Kay sniveled on. By this time the events had attracted the attention of my dad who'd been tipped off by another usher who told him that "...Wes and Bill are down there gettin' fired for stealing pucks!" In short order my dad arrived on the scene. I'll never forget the sight of him storming along the front row of seats, fire in his eyes hand-over-hand on top of the glass as people seated tried to get their feet out of the way. Now the poopoo hit the ventilator. Dad asked "If these two get fired, who's gonna do your damned ice smart guy?" "What business is this of yours?" one of the leisure suits spit back. "That one's my son, and if he goes I go and you've got no Zamboni driver smart ass." dad barked as he got nose to nose with the wannabe rockstar from Kazoo. By this time, Civic Center manager Bill Fifer arrived. The leisure suits started up with him now... MISTAKE! Fifer heard about four words and stopped the leisure suits cold. "This is MY building and only I hire and fire the people who work here. You've got your 2 cents worth of pucks back, now take them and go back up to your booth where you belong and don't bother my people anymore." he roared pointing toward the broadcast booth up in the rafters. Of course the leisure suits had to try again and make it worse on themselves. "We'll take this up with Gears management." they tried to threaten. Fifer told them, "You go right ahead, but the Gears do not run this building, I do. Now go up to your booth and stay there." about this time one of the Saginaw police officers who worked arena security walked quietly up. "We'll see about that." the other leisure suit from Kazoo hurumphed. Fifer did his famed two fingered point toward the loft and said "Go back to your booth and leave my people alone, now!" It was clear that the Kalamazoo Wings were not gonna win this one and the rockstars in their disco outfits left and went to their booth trailed quietly by the police officer. Not another word was said to us, but Bill and I agreed to each other to never touch another Kazoo puck. The Gears went on to win the game 2 goals to 1 and the leisure suits went home with a loss and all of their precious pucks.

When the Kazoo Wings returned for their next game on December 11th, we were all ready for them. My dad had talked to Gunner, the Gears trainer, and they'd decided that if our people were not allowed to touch Kazoo pucks, that applied to the Gears stickboy too. The warm-ups ended, Bill and I went onto the ice and did our jobs without touching a Kazoo puck... the problem was that no one else touched them either. So, there we stood... waiting and there dad sat on his Zamboni- motor running and waiting for the pucks to be cleared. Finally he climbed down and went to the visitor's dressing room and shouted in with one of his patented "HEY!"s. The Kazoo trainer came out and dad told him if he wanted to have a hockey game, he'd better get someone out there to clear the Kazoo pucks from the ice. The puzzled trainer asked what about the Gears stickboy? Dad pointed toward the leisure suits up in their broadcast booth and told him that those two want anyone who touches a Wings puck fired, so no one is gonna touch them. After a protracted retreat back into the dressing room, the trainer waddled out onto the ice with a puckbag and picked up all of the pucks... as he did in the next game... and the next. Soon Kazoo began bringing their own puckboy to Saginaw. Although the fun only lasted for a few more games, we had made our point with the Kalamazoo Wings.
Posted by Wes Oleszewski at 1:15 PM