The Roots of the GEARS 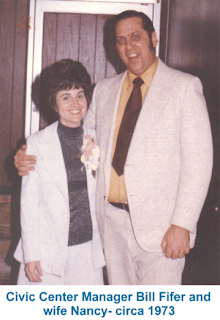 THE ROOTS OF THE GEARS

The beginnings of the Saginaw Gears and professional hockey in the Tri Cities took place not in the Saginaw area itself, but in the great white north of Duluth, Minnesota in the autumn of 1970. While conducting a pre-season NHL game at the Duluth arena, Minnesota North Stars General Manager, Wren Blair had a brief, but very important conversation with building Manager, Bill Fifer. Essentially, the conversation consisted of little more than a "See ya' next year" from Blair followed by Fifer telling him that he, in fact, would not be in Duluth next year because he had taken the job of building manager at the Saginaw Civic Center. Fifer also mentioned that if Blair knew of anyone who wanted to place a minor league hockey team in Saginaw, Blair should contact him. Although finding new tenants was a part of Fifer's job description at the Saginaw Civic Center, what he did not know was that he had just planted the seed that would later become the Saginaw Gears.
A little bit about Mr. Fifer here from my own memory. My mom was hired as one of the employees who opened the Civic Center in the winter of 1971-72. At the time I was a 14 year old who stood 5 foot 5 and weighed in at about 80 pounds. I met Fifer on an early visit to the arena. He was a mountain of a man, with a deep voice that resembled thunder and there was no doubt that he was fully in command. To borrow a phrase from country and western comedian Jerry Clower, "I was about as afraid of him as I would be a bear." When Mr. Fifer spoke, I jumped... even when he wasn't speaking to me. He was THE right person to be the first manager of the new facility, because lots and lots of self-important blow-hards in the city of Saginaw had notions of exerting influence over the Civic Center, and all regretted the day they crossed wires with Fifer. My first job was as a vendor selling soda pop and popcorn in the arena and thus Mr. Fifer was my first boss. He stood up for his people... but he always scared the crap otta me.

Following that chance conversation Blair, who knew little about Saginaw other than it was someplace near Flint, turned his hockey eye toward the area. It is likely that no one knew the business of hockey the way that Wren Blair knew it, and what he saw in the Saginaw area really turned on his goal light. The city of Saginaw itself was a densely blue-collar place with no less than three huge factories that ran 24 hours a day and clothed and fed the core of the city's population. A thriving industrial support economy surrounded those factories. The new I-675 interchange expressway now also put the nearby communities of Bay City and Midland, each with its own industrial heart, within 20 to 25 minutes drive from the Civic Center. The demographics were perfect for a minor league hockey team to take root. To frost the cake, the IHL towns and franchises of Flint and Port Huron were each within easy driving distance from Saginaw. In this the era before most of the area residents had cable television and before the era of VCRs, DVDs, video games and the Internet, there was not a lot to do in places such as Saginaw during the long dark months of winter. The time and place were ripe for a minor league franchise to catch on.
Posted by Wes Oleszewski at 5:22 PM

Bill Fifer was exactly that, a "mountain of a man" and my father. I remember his voice and I remember his perseverance and willingness to take on governments trying to run the entertainment business. He ran the buildings he managed in a way that grew them into successful cultures of sports and entertainment. I started playing hockey in Duluth on the ponds and move to the luxury of the Civic Center to harass the skate patrol... Bill Fifer was an incredible man, dearly loved; and I hope that he and his wife, Nancy, are hopelessly in love in heaven somewhere...