There Came A Goaltender 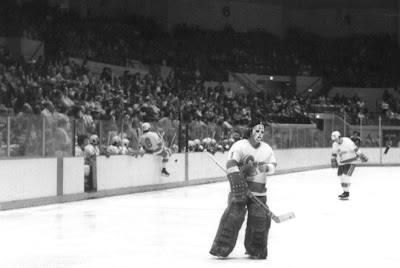 When Gears training camp began in the fall of 1976, a lot of fans took the opportunity to drop in and watch when the team allowed it. Some of us, however, had access to the building all the time no matter what the Gears said- so I was there often to watch training camp.

During every training session the team did a drill similar to the one done in pre-game warm-ups. It involves the forwards standing in a line just below the blue line and peppering the goaltender with shots. Sometimes the number of total shots taken in one round could add up to more than 40. The goaltenders took turns facing the pepper while we stood behind the glass and kept count- how many shots and how many went in. Goaltenders, of course, can't count all of those shots as they come in too fast and too close together for them to keep track while focusing on their game. During one training session a few of us observers were standing behind the glass and behind the net watching. The pepper started and when it ended the goaltender turned to us and motioned "how many?" That goaltender was Mario Lessard and through the rest of the drill we were giving him results such as 36 with 3 having gone in or 38 with 2 gone in or 32 with 1 gone in. When the drill was over and Lessard went on to other training camp exercises, we all looked at one another and realized that the numbers of shots equated approximately to the total number of shots in a game, and the number of pucks that Lessard allowed in equated to a winning season.


Mario Lessard came to the Saginaw Gears in 1974 from the Sherbrooke Beavers of the Quebec Major Junior Hockey League. As the 1974-75 season opened, Lessard shared net duties with Mike Palmateer who had also just come up out of the juniors in the OHA. Late in the season Palmateer was called up on the first leg of his journey to the NHL. He would spend two seasons with Oklahoma City Blazers followed by eight seasons in the NHL. Replacing Palmeteer would be Rolly Kimble, but in large part Lessard would take over nearly all of the remaining net minding.

In the 1974-75 season the team jelled around Lessard as the Gears went all the way to the Turner Cup finals, but lost to Toledo in seven games. The following year the team only made it to round 2 of the playoffs, but as the season ended there was a feeling of momentum for what may be ahead in the 1976-77 season. A good example of that feeling took place just a couple of days after the Gears were eliminated from the playoffs. I was in a tuxedo store getting fitted for my senior prom get-up and my mom was standing there chattering about how many days of school I had left before graduation. "Yep," she said, "there's only 28 more school days until he graduates." Out of the blue the guy taking my measurements quipped, "And there's just 168 more days until the next Gears game." Frankly, that was the attitude of most Gears fans in 1976. Personally, I always added "...if we can only keep Lessard." Everyone was feeling pretty good to see him back in the line-up the following autumn.

As we stood and counted shots in that 1976 training camp we seemed to all become aware that the coming season was going to be something exciting- especially with this little goalie in the nets. Of course, history shows that Mario did not let us down. He played a spectacular season and was a key element in winning the Turner Cup. After the celebration in Saginaw Mario was whisked up to the AHL's Springfield Indians for the 1977-78 season. From there he went up the the NHL where he played 5 seasons with the Los Angeles Kings. In the 1982-83 season Mario was sent to the CHL's Birmingham South Stars where he mostly rode the bench playing just 8 games- until the playoffs. Then he played 11 of 13 games and helped his team all they way to the finals. The next season he played 8 games for the AHL's New Haven Nighthawks and also played 6 games back with the L.A. Kings. Mario retired from hockey following that season.

I've read some "Sports Reporter's" accounts that state that Mario's numbers and ability began to decline in the early 80s. That is the accounting of a sports writer- as a historian, I take a different view. First off, Mario Lessard made it to the NHL! There are millions of hockey players who dream of such a thing and never make it. There are also hundreds of thousands of past and present professional hockey players who will never make it to the NHL. Additionally, Mario spent five seasons in the NHL once he was there. The L.A. Kings did not decline BECAUSE of Mario Lessard- rather they declined AROUND Mario. In his first season with the Kings the team won 34 and lost 34. In the following season they won 30 and lost 36, and the next season won 43 and lost 24. Then in 1981-82 they only won 24 but lost 41. In Mario's last full season with the Kings they won 27 and lost 41 and went through THREE coaches during the season- including Don Perry. Mario Lessard's Goals Against Average across all 5 seasons was 3.84. Sure at first glance his numbers for his last two seasons appear to show a decline with a 4.36 in 1981-82 and a 4.59 in 1982-83 but in 82-83 he only played 19 games- meaning he sat rusting on the bench most of the time. A goaltender's numbers can tell you as much about the players in front of him as they say about the netminder himself.

Overall, we Gears fans were just happy to have Mario Lessard as one of several terrific goaltenders who wore the tangerine and turquoise. In his book "The Bird" Wren Blair said about the 1976-77 Gears "That season we may have had the best goaltending in the IHL." and he was referring to Mario Lessard. Again, as a historian, I would be inclined to agree.
Posted by Wes Oleszewski at 4:51 PM

Very nice post, thank you, I was also a big Mario Lessard fan and it's nice to see his career and work not characterized in the usual superficial, derisive narrative. The Triple Crown Line and the Miracle on Manchester are always glorified, but Mario's work ignored. He was an all-star, the Kings were AWFUL defensively and most certainly did decline AROUND him. One example of this; in March 1981, the Kings, who I believe would finish third overall that season, beat the North Stars in Minnesota, 4-3. The shots on goal that game, 68-19 in favor of Minnesota. Those were the kind of working conditions Mario performed in. In the 1981 and 1982 playoff years, it's shocking to see how many times Lessard was left to fend for himself, even in those days of firewagon hockey. Mario's career declined in Don Perry's first full season as coach, 1982-83. The majority of the games that Lessard started (in between stretches of rusting on the bench) were against strong teams like Montreal, Boston, Chicago, Quebec. Anyway, thank you again for posting this salute to a talented, entertaining and under-appreciated goalie.