A Typical Day In My Dad's Zamboni Alley 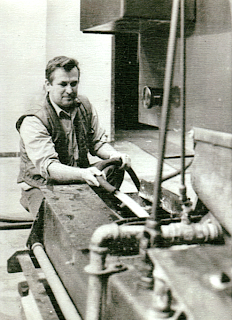 A TYPICAL DAY IN MY DAD'S ZAMBONI ALLEY

A typical game for Walt went something like this: About three hours before game time, which was about two hours before the doors opened, Walt would show up at the Civic Center, normally with one or more of his kids in tow and often with the whole family. Although there was much fibbing about it at the time, the fact is that we very rarely paid anything to pass through any door at the Saginaw Civic Center. On the few occasions, such as playoff games when we did have tickets, they were often "comps" from the team and even then, there was never anyone on duty early enough to actually "take" (or rip the ticket in half and give us the stub.) On the occasion when it was a sell-out game and I didn't have a ticket, I simply sat on the ice machine with my dad. Every now and then some self-important blow-hard from either the building or the team would come up point at me sitting on the ice machine and ask "Has he got a seat?" Dad would point at the water tank on the Zamboni and say "His seat is right here next to me." To which the blow-hard would retort "If he ain't got a ticket he's gotta leave." Dad would simply say "Fine, but if he leaves, so do I." The discussion rarely went farther than that. Still, in our family, the rule was that you did not get anything without working for it, so we all had work to do when we got to the game in order to "earn" our admission. Of course, before all of that could start, there was about a 30 minute period when dad had to visit the Civic Center office, and we kids got to take sticks gloves, skates and pucks out and had the ice all to ourselves. Often it was just me, alone in the big arena with the whole rink to myself- a hockey player's dream. Sometimes I'd be joined by the stick boys from the Gears, these little moments of free ice time were both a treasure and a privilege, not to mention a fond memory of my youth that I'll carry forever.

As soon as dad got back from the office, we were put to work chipping the edges at the base of the kick-boards. Next, he would edge with a motorized edger. All of this is to ensure that there were no chunks of ice along the bases of the boards that could cause a puck to take an odd bounce. Often, dad would use his secret method to also ensure that the boards were flush to one another at ice level. This involved taking a common golf ball and zinging it along the ice up against the boards. In one throw he was able to make it go nearly the entire distance around the boards. If at any point the boards were not flush, the highly reactive golf ball would touch the protruding board and zip off across the ice. He would then go to the point of departure and fix the board. The little white ball would be tossed both ways to insure that the boards were perfect.

On his first re-finish, before a game dad would do a heavy shave to smooth the ice. We kids would shovel the snow as he came off of the rink. After the shave, he would go out and do a heavy flood with the rag down. As he was doing that, we kids would drag the game nets out of the storage area next to Zamboni alley and check them for holes or damage. Once the flood was done, the ice needed about 15 minutes to set up. Next, we kids would take the nets out onto the ice and "walk 'em" or simply keep them constantly moving. The steel bottom of the nets was comparatively warm and if the nets were not kept moving while they came down to the temperature of the ice itself, they would simply melt their way down to the cement of the arena floor. While we kept the nets moving, dad would come out and chop the ice out of the holes where the net pins were located and then place the pins. After about 10 minutes of net walking, they were ready to be seated onto the pins. After that the doors were closed in wait of the team. The ice resurfacer then needed to be re-filled with water and the excess snow washed off. Then it was time to go to the Blue Line Club for dinner.

After each game and long after the crowd had cleared Wendler Arena, the before game process was repeated, only this time, the game nets were removed and the practice nets had to be walked. The difference here was that we walked the nets while dad was resurfacing and normally while wearing skates left on from the after-game public skating. Dad's big rule- "NEVER skate on the fresh ice" was often violated by me as after parking my net, I'd skate over and grab onto the back of the Zamboni and glide behind as dad and I discussed that night's game, beneath my blades was the most perfect ice in the world, made by the best damned Zamboni driver who ever lived. Once the practice nets were placed, we shoveled the snow and headed for home. In all I would calculate that we kids each did about two and a half man-hours of work at every game, which at the minimum wage of the that era was well worth the value of a ticket to the game.

After the Saginaw Gears franchise folded in 1983, Walt went on to drive for the Saginaw Generals and then for a short time to drive for the Saginaw Hawks. Overall, he spent a decade making the best ice in the IHL. After having started his tenure at the Civic Center as a program vendor, then moving on to dual roles as Zamboni driver and head usher and later just the czar of ZAMBONI® alley, Dad was as much a fixture at the Gears games as was the original logo.

In 1991 he suffered a massive heart attack, but was able to recover for the most part. He was, however, forced to retire from the railroad but he was happy to spend his hockey seasons watching the Detroit Red Wings on television and working a few hours a week at the McDonalds in the Midland Mall. In 2002 my wife along with my mom and dad were with me at Port Huron while I was doing a book signing. We stopped into a little hotdog place across from McMorran Place arena. While there we started telling my wife all sorts of stories about games in Port Huron and other places as well as tales of Gears home games. Dad paused for a long moment sort of gazing off into the past- then he quietly said, "Damn, I miss those games." I decided right then to try and bring the Gears games back to life here in cyber space. On December 4, 2004, however, dad's weakened heart finally gave out and he passed away quietly in his sleep at home. I miss my dad, and I miss skating on his perfect ice. Some guys have crummy relationships with their father- but not me. My dad supported me in everything that I attempted and took real pride in everything I accomplished. Before his death, he read some of what is on this blog plus some of what was planned, and corrected a lot of details, because he was there, and we were there. To his memory, this site is dedicated.
Posted by Wes Oleszewski at 6:18 PM