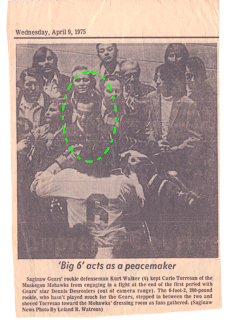 WALT: THE TEAM'S GOOD LUCK CHARM Every word of this is true folks... By the 1975-76 season, the Saginaw Gears were becoming one of the hottest teams in the IHL. This was due to talent, experience and good coaching. Yet some of the players began to think that there were extra elements involved as well.

One of these extra elements was a superstition that went like this... If when the Gears came out of their locker room to take the ice and Walt was standing outside of the boards, at the team's rink door, leaning against the dasher with his pipe in his hand- the Gears were going to win!

By mid season, word of this superstition got back to Walt, who then made sure that he was standing there every time that the team came out. Then, on February 7th, 1976, Walt got a handful of free tickets to the Gears away game in Port Huron and thus the entire family went on a road trip to see the Gears play. For the record, this seemed like the coldest day of the year and the walk from the parking lot out side of McMoran Place was an arctic trek. Once everyone was seated and the teams were ready to come out onto the ice for the first period, Walt strolled down to the rink door where the Gears were about to take the ice, and leaned up against the dashers with his pipe in his hand, just like back home. As the Gears came through the door and each player saw Walt there, they all lit up with surprise "Hey! Walt!" was heard echoing across the ice- then they lit up the Port Huron Flags.

The game turned into such a route that Port Huron's coach, Bob McCammon pulled his goaltender during the second period to get an extra attacker and try to get something going. The final score on that bitter cold night turned out to be 10-4 in favor of the Gears. In hockey, a superstition can go a long way. Of course, one problem in this superstition was that the team door, in those days, was often the same door for both teams and thus the location for some of the after the buzzer rough stuff. In the Saginaw News clipping, seen here, Walt is seen directing traffic while Saginaw's enforcer Kurt Walker and Muskegon Mohawk's goon Carlo Torresan do an after the buzzer audition for the movie Slap Shot.
Posted by Wes Oleszewski at 5:41 PM