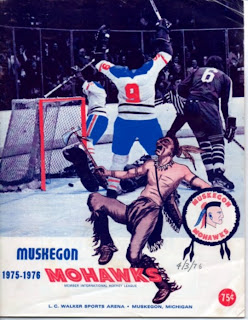 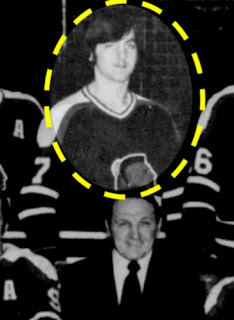 In hockey there are a number of penalties that you can get, but two of the worst are the Gross Misconduct and the Match Penalty. Normally, a Match Penalty is given out to someone who does something so horrific that it even offends the goons. Stuff like lopping off another player's head with a stick or ripping off an arm and then throwing it into the crowd. A Gross Misconduct is issued after you do something so amazingly stupid and unsportsman-like that even the goons shake their heads at it. Stuff like taking the announcer's microphone while you're in the penalty box and bashing the guy in the other box over the head with it until the microphone no longer works. If the guy's head no longer works- then it's a Match Penalty.

In the mid 70's the IHL's Muskegon Mohawks were not known as a powerhouse, but they should have been. Their seasonal play was always pretty good and they were always tough in the playoffs. Their arena was a bit less of a barn than Toledo's and a bit more of a barn than Port Huron's and their fans were extremely loyal. As the playoff season of 1975-76 got underway, the Gears found themselves again up against the Mohawks. In the 1974-75 playoffs, in the second round, the Gears had fallen behind the Hawks 3 games to 0, but came back and won 4 straight. They went on to highlight that in the 75-76 regular season by losing only two games to Muskegon. Still, the Mohawks were not to be taken lightly in the playoffs and they had been paired with Saginaw for round one. Starting in the 1974-75 season the Hawks added a new defenseman to their roster- Carlo Torresan.

Standing 6 foot 1 inch and weighing in at 205 pounds, the French Canadian did not speak a lot of English- he spoke goon. Of course you do not have to take my word for it, Torresan started off his career in the Quebec Major Junior League in the 72-73 season with 400 penalty minutes in 64 games. He settled down a bit the following season with 280 minutes in 69 games before being sent to the Mohawks. In the IHL his penalties dropped to about half of those in his Junior years as he had only 103 in the 74-75 season and 189 in the 75-76 season, yet Torresan was still no one to mess with. One his favorite foes in the IHL was Saginaw's own Dennis Derosiers. Described as "One of those guys who just couldn't control himself." Torresan was as easily drawn into trouble as he was to create it himself. That all came to roost on the evening of April 3, 1976 when the Gears played a first round game against the Hawks in Muskegon.

The first period had been rough and a fairly chippy and the second period started off the same. Torresan and Rosie were were making runs at each other early on in the game.Then at 3:50 into the period a series of fights broke out. Dave Westner and Rosie both ended up with fighting penalties for the Gears while for the Hawks Sid Prysunka got a fighting penalty and Carlo Torresan drew game misconducts for third man in a fight. In fact Rosie himself admits that he had been after Torresan all evening. "I was goading him big time," he said. And that included after Torresan was thrown out of the game. Standing in his street clothes, the Hawks goon got a smack on the glass by Rosie's stick every now and then as Dennis skated past. Then, with just three seconds left in the second period, Rosie had other things to focus on.

In the Gears zone, on the far end of the ice from the player's door, a series of fights broke out and in short order both benches emptied. Apparently, that was enough to push Torresan's final button and, as Rosie described it, "He went berserk." Suddenly, the Hawk's player's door to the rink came open and here came Carlo Torrezan onto the ice- in his street clothes and headed straight for Dennis Derosiers. The fans went nuts too as they saw their team's enforcer walking into the brawl. Torresan reached into his shirt pocket, grabbed his pack of cigarettes with two fingers and defiantly tossed it into the air behind him as if to say that he was ready for a fight. Rosie, who was busy with another Hawks player, did not see the goon coming- but Don Perry did. From the bench he was shouting "ROSIE! ROSIE!" Dennis, thinking that Perry was alerting him to another Gear in trouble, started looking around for teammates in trouble, but everyone else seemed to be holding their own even though Perry kept shouting. "I couldn't figure out who Perry thought was in trouble." In fact, Perry was trying to warn that Rosie himself was they player that Torresan was coming for.

Up in the stands I saw the whole thing and I thought to myself that Torresan was making the dumbest move in hockey. Anyone who has watched a lot of hockey or played the game knows that the dumbest thing that anyone can do is go onto the ice in street shoes and try and take on a player in skates. When I saw Torresan headed toward Rosie, I recall saying out loud "Here comes a clock cleaning." Rosie turned and spotted the approaching Torresan just as the goon was about four steps away and the look in his eyes said the same thing that I'd just said aloud in the stands.

Rosie recalled what happened next, which was an event that no one in the arena or reading this story could have expected. "Just as I saw Torresan something big and padded shoved me aside and I went down on the ice face first. By the time I got up and looked there was Mario Lessard beatin' the shit out of Torresan!" The Gears goaltended had seen the Muskegon goon come onto the ice, dropped his equipment then went charging out and flattened the guy. Saginaw went on to win the game and took a commanding lead in the series. For his antics that night, however, Carlo Torrezan received a Gross Misconduct that carried a fine and a suspension that should have ended his season.

Hawk's management, however, negotiated a lighter sentence for Torrezan. The deal (of which I'm still researching the details as of this writing) involved Torrezan returning for the final two games of the series conditional his not fighting or receiving any other major penalties. If he did get involved in any of his normal conduct, he would be immediately suspended for the remainder of the season and perhaps from the IHL- forever.

That night the Gears eliminated the Mohawks from the playoffs.Torrezan played just one more season of professional hockey with the Mohawks and then dropped out of the hockey record books. Thirty five years later, Rosie recalled, "I got even with that f%#ker for everything he did to me all season that night."
Posted by Wes Oleszewski at 2:05 AM