What's that in the driveway? 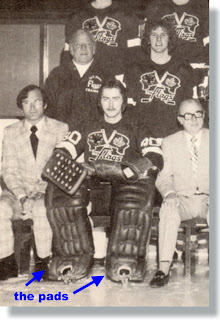 It was a normal, regular-season Gears game and they were playing at home against the Port Huron Flags. The date was Friday, February 27, 1976 and as of this writing I cannot publish a score, but I seem to recall that we lost.

The score of the game really didn't matter all that much to us fans, what was important was just the social aspect of "Goin' to the Gears game." The winter had been long and dark and any chance to get out of the house and among people was a welcome thing. At the game there were friends to visit with, hockey gossip to share, skating after the game and a Blueline Club to hang out in until my dad was ready to head home. Since this was a weekend game, the whole family was there- my sister, brother mom and, of course, dad to drive the Zamboni. After the game, as the evening grew late and the gang in the Blueline Club thinned out, dad directed us to "Head otta here." We made our way into the darkened arena, through Zamboni alley and out into the truckwell. One of the advantages of being the Zamboni driver was that dad always had a parking space in the truckwell, normally right next to the back door to the arena. When the wind blew and the snow flew and the temperature was in the single digits- that parking perk was a very good thing. This evening we all piled into dad's land-boat station wagon. It was a white, 1975 Ford LTD with a luggage rack that we never used. The car was a real monster that probably got about a dozen miles to a gallon of gas- but who cared, gas was 29 cents a gallon. Dad maneuvered the monster easily out of the empty truckwell and off toward home we went.

Our trip home took us up I-675 to Tittabawassee Road. Always treacherous in those days, that little stretch of road was two lanes of slick running in dry conditions let alone in the rain or snow. Deep ditches lined each side of the dark country road and our family had already lost one car to the evil highway. At M-47 we hung a right and headed toward Freeland. On the way we passed Wally Shaver's house- his VW bug was already in the driveway and the house was dark- his workday was over. Turning into the town of Freeland we zig zaged to Dawn Drive and tooled into the driveway and home. Soon we were settling in, mom and kids to bed and dad, who worked nights on the railroad, staying up watching late night TV.

Saturday morning found most of the family half awake and in the standard "morning in February" mood. Sometime during the morning mom glanced out the window and then became quite puzzled. "What's that in the driveway?" she said quietly. "What', what?" dad replied. "There's something big and dark layin' out in the driveway." Mom explained. That attracted my attention. Looking out the window I saw a large, rectangular object laying at the far end of the driveway. It was dark in color and was partway in the ditch. It looked like a box of something that someone had tossed. Electing my little brother, mom told Craig to go out and "...see what that is." Ever fearless, he trotted out in the morning cold in the hope that it was something really cool- like a dead body. Instead, what Craig found was even cooler.

As we looked on, my brother reached down and picked up a pair of professional goalie's pads that were nearly as tall as he was. With beaming smile my brother the goaltender hauled the big pads into the house. They were strapped together to form a single unit and appeared to be well broke in. We were all a bit shocked, and a lot puzzled. How the hell did these pads get there and whose were they? Ever paranoid, I thought someone had driven by and chucked an old pair of pads in our driveway, but my brother quickly pointed out that although well broken in, these were not junk pads. Dad thought they'd gotten hooked on the bumper and dragged home- but they did not have scratch on them. Finally after a lot of head scratching, dad decided to call Gunner.

Gunner was in the Gears room early, preparing for that evening's game against Kazoo. He said that the Gears goaltenders both had all of their equipment including pads. He told dad that he'd call over to Port Huron and see if they were missing anything. In a few minutes the Gun called back. Apparently he'd contacted a Flags dressing room that was in a bit of a panic. They'd discovered the missing goatender's pads late the previous night when they got back from Saginaw and they belonged to their prime goalie Bill Oleschuk. He needed them for that night's game against Columbus. There was no way for them to get another set on a weekend plus have the time to break them in.

My dad asked me if I wanted to drive the pads to Port Huron. I asked "What're they gonna give me for it?" figuring that there should be some cash for returning an expensive set of pads. Gunner replied to my dad that the best the Flags could do was offer me a free ticket to tonight's game in Port Huron. Yeah... right. I told my dad to tell Gunner- sorry no deal, tell the flags I hope they have a nice game without their lead goaltender. Gunner, being far more sporting than I was, asked if I'd at least drive them to Wendler Arena and he'd have one of the Gears stickboys drive 'em to Port Huron. That, I agreed to do.

As best we could figure out, while the Port Huron trainer was loading their bus down in the truckwell, he must have put the pads on top of my dad's station wagon while he loaded other equipment. Then he forgot that they were there or got distracted and simply left without them. When we came out in the dark and got into the car no one saw them. They must have rode all the way to our house on top of the car and then when dad swung into the driveway they just fell off. It was just amazing that those pads rode all the way out to Freeland without falling off. It also made for great conversation at that night's game against Kazoo.
Posted by Wes Oleszewski at 3:02 AM