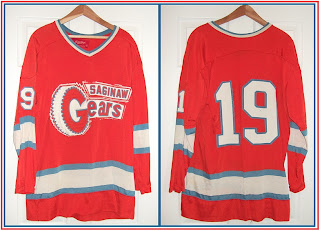 There are a few things in anyone's collection that they can call their "prized possession" and this is one of mine. This is one of the heavyweight Rawlings jerseys from the 1973-74 season and worn by Pierre LeBlanc.

I got the jersey, not from an auction, or yard sale, or ebay- instead I go the jersey because Gunner threw away some team equipment bags at the end of the 1975-76 season. The story is that after the season had ended I was at the Civic Center helping my dad do some close-out tasks in Zamboni alley. I took a bag of trash to the compactor room and there I spotted several worn-out Gears equipment bags that Gunner had tossed. I rummaged through them and found two that were not total wrecks. So I nabbed both and took them out and stuck them in the car. My dad was a bit appalled, "What'd ya' want with those?" he asked. I just said they were "cool" and stuck them up in the rafters of our garage. A year and a half later, I was down at college and dad called. He told me that the Gears were "short on bags" and he said Gunner wanted my bags back. I told him I'd trade Gunner one bag for one game jersey. Then I added that I wanted to keep the "Westner bag" because it still had a good zipper. When I came home for Christmas break, there was my beat-up jersey... and I was more than happy with it.

As a side story- in 1994 I was down in Texas doing some training for one of the airlines I've flown for and I got a call from my wife. She said she was going to make a quilt from all of my old tee shirts and wanted to know if it was okay to cut up that old orange Gears jersey to add to the quilt. I responded with an "AKKKKK!" that I'm sure could be heard all the way from San Antonio. Of course- the jersey still hangs in my closet today.
Posted by Wes Oleszewski at 10:36 PM