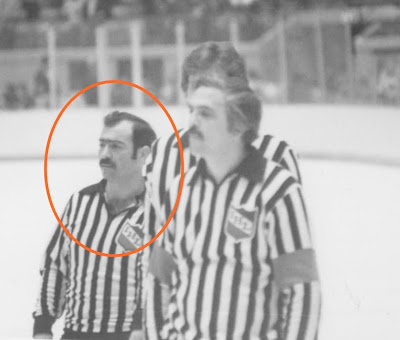 Hockey at the IHL level in the era of the Gears had plenty of its own colorful characters. Some of them were players, many were coaches and a few were officials. My favorite was tough little fellow by the name of Luigi Cortese. Although some may have expressed their flair with outward showmanship, Luigi expressed his quietly, and away from the public by using his quiet sense of humor and his name.

Luigi was never one to take the game, the fights, the players, the coaches, the fans or himself too seriously. A good example of this is from Blake Sebring's "Tailing the Komets" blog, a fan writes:


"Once as a kid sitting down in old section 49 after a game, I threw a paper cup and hit the much loved late IHL linesman Luigi Cortese in the rear end as he went to pick up a puck. He turned around, looked right at me and wagged his finger. I about died laughing."


The practical joke that Luigi liked to pay the most involved how he signed in before each game. The officials were asked prior to the game to submit a sheet to the score-keeper that had their name written on it. Of course that name was then broadcast over the PA when each game started as their "Our officials tonight are..." announcement. Knowing that none of the PA guys could pronounce his name correctly, Luigi messed with them by spelling his name differently every time he turned in the card. Some of the variants were "Louis Cortese" "Louie Cortez" "Lou Corteeze" "Luigi Certeezie" "Loo Cortese" and my favorite "Louy Cortoui." Interestingly, his name is listed in the Gears program magazine as "Louie Cortese" and in the Muskegon Mohawks program magazine as "Louis Corteese" and the Port Huron Flags program magazine as "Lou Cortse" all in the same season.

No matter if he was coming in the building or going out, coming off the ice or going on, Luigi always had a good word of some sort to say to anyone he encountered. From a game that turned into a bench brawl to a Turner Cup final game, he always added a twinkle that lightened up everyone. And everywhere he went, PA announcers slurred and stuttered trying to pronounce his name. To this day, I'm not sure exactly what it really was or how to properly say it- but most folks can say the same about my name too.
Posted by Wes Oleszewski at 3:33 AM