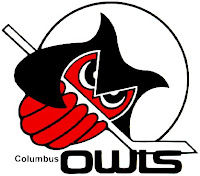 Trades and releases are all a part of professional sports at any level. Sometimes such trades and releases take place for reasons that are totally subjective and often to the players involved, such events are a bit painful and seem quite unfair. Even superstars get the treatment. Phil Esposito once recalled a night in a hotel room during the 1975-76 season when he was summoned to coach Don Cherry's room with Bobby Orr. Cherry bluntly told Esposito that he was being traded. "Don't tell me it's New York," Espo' said deadpan, "or I'll jump out that window." Cherry turned to Orr and said "Bobby... open the window."

In the early part of the 1973-74 season the Saginaw Gears made a number of changes in their roster- some of which seemed unexplainable to Gears fans. Some fan favorites such as Mike Legg, Steve Lyon, Murray McNeil and Elgin McCann were suddenly sent to to the newly formed Columbus Owls with the only explanation being that they were traded for "future considerations." Gears fans responded with a collective "Say What!?" After all, Columbus had won just 10 (yes TEN) games in the previous season as the Seals and only five more games than that the season before! What possible "considerations" could the new Owls franchise offer the Gears that would be worth four of our best players? To the players, being told that they were being sent to Columbus where their home rink, the Fairgrounds Coliseum, did not even have glass on the boards- instead it had "chicken wire" was probably a lot like telling them they were being sent to hockey hell. Aside from having to skate in that barn, they were also being added to a team that was newborn out of the thankfully dead Seals franchise.

In the end of October, 1973 the new Columbus Owls were slated to meet the Saginaw Gears for the first time. The game was scheduled to take place in Saginaw's Wendler arena, where the rink did have glass instead of "chicken wire." The day of the game, John Pozenel, who was at the time one of the lead sports reporters for the Saginaw News ran an interview with Steve Lyon. The piece was titled "Lyon, Ex-Gears Looking Forward To a Reunion." In it the former Gear was asked if he and his fellow Gears expatriates were indeed looking forward to the game. "You bet your (bleep) I'm looking forward to playing in Saginaw" When asked if playing against his friends and former teammates would be a problem he said, "I always like to knock people on their butts. If they happen to be friends, that's even better." Lyon also said that he thought this new Columbus team was a lot like Saginaw's team the previous season, "We've got a big young team. Maybe we don't stick handle and stuff as well as some of the other teams, but everybody knows we're going to be physical. We only have seven guys who played in this league last year and four of them are from Saginaw." He added, "I think we all feel the same way. We have something to prove to Saginaw." Pozenel concluded the article with a question of his own to his readers "Did the Saginaw Gears make a mistake in letting the four go? Tonight's game may begin to answer that question."

What a lot of fans have never witnessed is the players hanging out before the game- and I mean before the doors open, when the players had just arrived on the bus and the Gears were just coming into the building. Very often, the players from each team would stand together and joke and talk- because many of them knew each other. They had played together in other leagues, in the juniors and on other teams in the past. One night before a game that was billed as a big grudge match as their had been brawl in the previous meeting between the teams, I stood and listened to a Gears player and a player from the other team joke about the big brawl with one another. "Why'd ya' have to hit me in the ear like that?" the one player snickered, "my f#&kin' ear was ringin' for two f#&kin' days." The other player just smiled and said, "Ya' had my f#&kin' jersey over my head, I couldn't see where I was hittin' ya'." The secret is that these guys are all about playing the sport and they don't take it personally. Tonight they may be your opposition, tomorrow it may be "Bobby...open the window," and they may be doing their job on the same team.

So it was that the new Columbus Owls came to town, and appeared to carry on where the Seals left off as the Gears rolled over them 7 to 0. Before and after the game I saw the four former Gears hanging out with their former teammates. Talking, joking and not taking the game results nearly as seriously as the fans took them. The fact is that in this, their initial season as the Owls, the Columbus team was indeed just as Steve Lyon had said in the interview with Pozenel, much more like the 72-73 Gears than like the 72-73 Seals. They were actually building the foundation for a good hockey team. They went on to win 40 games in the 1973-74 season, 10 more than the Gears won in their first season and 2 more than the Gears would win in the current season. Thus, perhaps the four former Gears did actually prove something to Saginaw- it just took them more than one game to do it.

Bobby... open the window.
Posted by Wes Oleszewski at 8:57 AM