A "home-opener" to remember 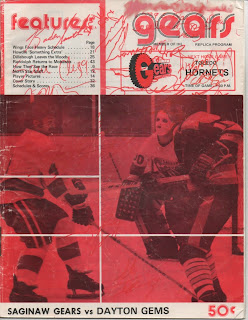 When Gears owner Wren Blair flew into Saginaw with his wife and daughter for the 1973-74 Gears home opener game, he was counting on a pleasant, relaxing night at Wendler Arena. He figured on speaking a few words along side Mayor Wendler and then retiring back to his VIP seat owner's seat and watch his team play some fine hockey. In fact the last thing on Blair's mind that night, as he watched 4,422 fans fill the seats at Wendler Arena, was to find himself coaching the Gears while being shorted four of his best players.

Opening ceremonies delayed the start of the game by some 30 minutes as the Saginaw Community Youth Band played all of the songs needed to get a home-opener started. Waiting to get things going was Referee Kerry Fraser. Having just joined the NHL's official's association on September 1st and now working the minor leagues for "seasoning" Fraser was about to find himself getting well-seasoned on the evening of October 18, 1973. On that night the Gears were hosting the Dayton Gems and although the game began as a celebration, the atmosphere would soon change. From the opening faceoff, Gems enforcer Dave Simpson was doing what he did best- making trouble. His job was pick and poke at the Gears, make them mad, get them focused on him rather than their positions, distract them, sucker them into retaliation and the resulting penalties. And it did not matter how many penalties Simpson drew in the process. He had taken 332 minutes in the box the previous season, so he knew exactly what he was doing.

By the start of the second period Simposn's game plan was working well... perhaps too well. John Fraser had gotten the games only goal in the first period and scored a second one just 2:30 into the second period. Simpson had singled out Saginaw sharp-shooter Dave Cressman and tried just about everything to to draw Cressman into either a penalty or a fight. It was quite apparent that Referee Kerry Frasier was allowing a lot of stuff to get by- on both sides. Finally, at 10:19 of the second period, Simpson must have gotten bored with just chasing Cressman because he pulled him down and started to beat on him. Although Cressman did not get a single punch in, he was given a 5 minute fighting penalty and Simpson was given the same plus a 2 minute minor for high-sticking. Simpson had pulled the same number on Marcel Comeau in the first period and as he was locked up in the box he started inviting the Saginaw players with some "You wanna be next?" trash talk. Although it is not recorded in press accounts of the day, I recall that he subsequently reached out and actually grabbed Mike Hornby by the jersey as he went past. That's when all hell broke loose.

Hornby went after Simpson in the box as the players on the ice swarmed in that direction dropping gloves and squaring off. In less than a heartbeat Dayton's Peter Fleming leaped off the bench to join the fights and that was all it took. The Saginaw and Dayton benches both cleared and the brawl was on! It wasn't long before goaltender Sam Clegg, who'd been taking a lot of pokes, shoves and slashes from Simpson all night, decided to get into it and he too charged the penalty box. Clegg's move inspired Dayton goalie John "LaVasseur" to leave his crease and start taking shots at Saginaw players. LaVasseur, however, did not drop any of his equipment other than his stick. Enraged by this cowardly act Clegg faced LaVasseur challenging him to take off his mask and gloves and "fight fair." Instead, LaVasseur, still in his gear went after Clegg looking to do some damage. That served to make Don Perry's head explode- having spent so many years in the stitches leagues, Perry had seen a lot of fights and plenty of bench brawls, but LaVasseur's actions now were way over the line. Perry and Gunner both went out after "the little coward." Gears minor official Ken Schueler, who was tending the Dayton penalty box, was forced to climb over the glass in order to escape the riot. Now the Gears players, coach and trainer were all in a tooth and nail brawl with the Dayton Gems. The fight was so violent that they actually broke the penalty box. ("I'm tellin' you Broom County is just visibly upset by this display... come on down and buy tickets for the home games, bring the kids, we've got entertainment for the whole family!" -Jim Carr "Slapshot." )

This whole situation left Wren Blair with half of the home opener still left to play and no one to coach the team! Blair, who had formerly coached the North Stars, was the only professional coach in the arena besides Tom McVie of the Gems, and it was a sure bet McVie wasn't going to help. Thus, Wren Blair, who had come to town to relax, suddenly found himself behind the bench picking up the pieces after a brawl- and he was NOT happy about it. Still, as Blair came onto the ice and headed to the Gears bench the Saginaw fans went nuts- they knew that the team was in steady hands

Jim Armstrong took Clegg's place in the net for Saginaw, but for reasons unexplained LaVassaur was allowed to remain in the game for Dayton. John Gaw scored for Dayton at 15:57 of the second period and Juri Kudrasovs got Saginaw's first goal of the season exactly 4 minutes later. The third period was very quiet with Lowell Ostlund at the final goal for the Gears at 12:31. The game ended with the Gears losing 3 to 2.

In the wake of the home-opener bench brawl IHL Commissioner Bill Beagan traveled to Saginaw to visit local TV stations and review news video of the brawl. In the end Don Perry ended up with a 5 game suspension which conveniently covered the Gears next meeting with the Gems on November 2nd. There was also a hefty fine applied, but the amount was not made public. Both Blair and Perry blamed Referee Kerry Fraser in the media for "losing control of the game" but no one blamed the Gems for losing control of their players (one who reached out of the box and another one who was first off the bench as well as a goalie too chicken to remove his mask and fight like a hockey player) or Perry for losing control of himself. In their book it was all put on the newbee ref. who let 'em keep playing. During his suspension, Perry was replaced behind the Gears bench by Ted O'Connor the chief scout for the Minnesota North Stars. O'Connor had been scouting in Toronto when he go the call from Wren Blair to come to Saginaw. The Gears skated to wins in 4 out of 5 games under O'Connor including the next Gems game, but went into a slump upon Perry's return. What a way to start the season.

Posted by Wes Oleszewski at 9:35 PM