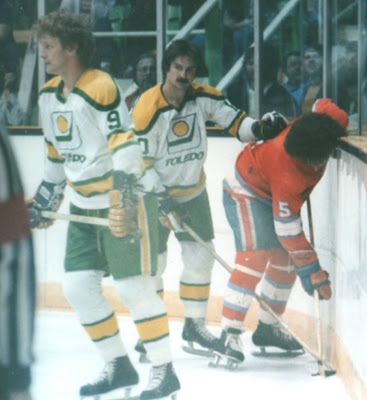 By the first week of November, 1973 less than a hand full of the "original" Gears remained in the line-up. One of those originals was center Juri Kudrasovs who held the distinction of having scored the first hat trick in the team's history on October 13, 1972. For you trivia buffs, Juri also scored the first Gears power-play goal while getting his hat trick. So it was odd to many fans that as the 73-74 season began, Kudrasovs was relegated to being the excess, number four, centerman behind rookie Jim Johnston. On November 6th, however, the reasoning would become clear- and public.

Kudrasovs, who had come out of three seasons in the juniors was drafted #147 by the Minnesota North Stars and sent to the Gears. He was one of few players to wear a helmet in those days. An interesting story once appeared in the Saginaw news concerning his helmet. The story goes that before going to play in the professional leagues, his folks insisted that he must wear a helmet. In fact they offered him $500 at the end of the season if he wore his helmet in every game. Picking his battles well, Juri went out and bought one of those flimsy plastic Joffa helmets that would probably may just stop a Nerf puck... depending on the shot. Still it was enough to satisfy his mom and off he went to play hockey. Occasionally, since Juri's folks lived near Toronto, they'd come to Wendler arena to see him play. On those nights, Dennis Derosiers would pull one of his patented practical jokes. He'd either hide the helmet or he'd wear it himself out to the warm-up. Juri would freak as game time approached- seeing the likelyhood of losing the $500. Of course, he'd finally get his helmet back before the game started and his folks probably never knew the difference as they proudly watched him play.

After scoring a respectable 34 goals in his first season in the pro.s, Kudrasovs decided he needed a raise for the next season. So prior to the start of the 1973-74 season, he asked for an additional $3,000 to be added onto his original $5,000 seasonal pay. In 1973 terms, this was a fairly hefty increase. Also in 1973 terms, although their scoring production was about the same, this was Juri Kudrasovs of the Gears asking for 40% increase in his pay and not Danny Grant of the North Stars. Gears "management" said no. This resulted in what the Saginaw News called in a November 6th story "...an off-season salary dispute with Gears management." The results were not only his being bumped into the shadow of Jimmy Johnston, but also his being traded to the Toledo Hornets. Of course- it could have been worse, after all if Gears "management" had really been ticked at him they would have sent him to Columbus... eh?

Juri, however, would have his revenge on Gears management. Just a year and a half later, the Toledo Goaldiggers would would carry the Turner Cup into the visitor's locker room at Wendler Arena as they beat the Gears in game 7 of the finals. Chief among them was Juri Kudrasovs who, while sipping champagne from the cup said to reporters, "The gears are pretty good, but Toledo is number 1." At that moment he was correct in making that statement.

Two years later, almost to the day, the Goaldiggers lost game 7 to the Saginaw Gears and walked dejectedly into the visitor's locker room empty handed. Perhaps only Juri himself knew at that moment that he had played his last professional hockey game. Yet in hind-sight, Juri had previously had his revenge on Gears management.
Posted by Wes Oleszewski at 2:55 PM