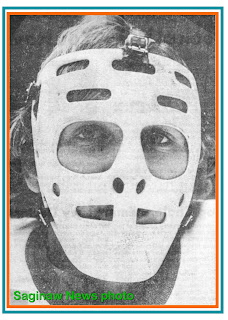 We got this message on December 9, 2010... interestingly, the web site's server has it listed as having been posted by "Anonymous." Of course the server also posts my comments as having been done by "Anonymous." Still, it took just a single read before I figured out who this was... even though he had a tendency to wear a mask.

HELLO, THERE. I HAVE A LOT OF FOND MEMORIES FROM MY YEAR IN SAGINAW. THE PLACES THAT WE LIVED AT AND THE PEOPLE WE MET AND THE FUN WE HAD. I REMEMBER GETTING A PHONE CALL FROM JOHN POZNELL SR. IN 1992. I WAS RAKING LEAVES AT MY COTTAGE IN FLIN FLON, MB - MY HOME TOWN - AND THE GUY AT THE OTHER END SAID "WHERE WERE YOU 20 YEARS AGO TONIGHT?" AND I SAID "WELL, PROBABLY SAGINAW, MI." AND HE SAID "NO, YOU WERE OPENING THE SEASON IN PORT HURON." WE HAD A NICE CHAT. I KNOW HE HAS PASSED ON BUT I ALWAYS WANTED TO COME BACK AND SEE THE ARENA AND HAVE A GAME OF GOLF WITH DENNIS DESROSIERS - MAYBE I WILL THIS SUMMER - AS LONG AS ROSY PAYS FOR MY GREEN FEES, I'LL BE THERE! SIGNED, NUMBER #1 (72-73)