The return of Dennis Desrosiers 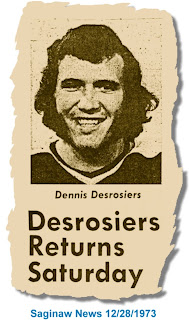 One evening in late December, 1973 I was helping my dad by shoveling some snow in Zamboni alley following public skating. He'd just done his heavy shave of the ice and I had to fill the machine with water and shovel the snow by the door while dad went and talked to Gunner. Dad came out of the Gears locker room with a stride and an ear-to-ear grin that he only got when he had REALLY good news. He knew some big news and as he rounded the ice machine he almost jumped aboard he said "Guess what!" I simply replied "What?" He turned the key on the machine and said "Rosie's comin' back!" Then he headed out to do his heavy flood and as he rolled past me he said "but you can't tell anybody, they haven't announced it yet."

I recall doing some sort of victory dance and saying "YES!"

Anyone who had followed the Gears to that time knew what it meant for Dennis Desorsiers to come back, because we had seen what playing without him in the lineup for nearly 3 months had been like. The team had not been bad, but they had not been good either. What was desperately needed was what Rosie brought to the ice and to the room. The rumor that he was "riding the bench at New Haven" had been circulating around Wendler Arena for almost two months and everyone was of the mind that if New Haven was not going to use Rosie, the Gears sure as hell could. At the Gears game of Wednesday December 26, there was a constant hum that ran in the background. Some said Rosie was coming back, others said it was never going to happen. The fact that the Gears broke their losing streak with a 10-3 win over the Des Moines Capitols was almost totally over-shadowed by the rumors of Rosie's return.

Shortly after that evening the rumors began to fly around the tri-cities concerning the return of Rosie to the Gears. Finally on Friday, December 28, the Saginaw News made it official with the headline "Desrosiers Returns Saturday." Ticket sales at Wendler Arena skyrocketed.

Having scored 60 goals in the 1972-73 season, Rosie had earned his step up to the AHL. In researching for this article, I spent some time talking to Rosie on the phone about those days and his return to the Gears. Rosie said, "I have no bitterness about it (not being played enough in New Haven), but they weren't playin' me." I asked how the return to the Gears had come about and he said, "The word came down from the New Haven team. Wren (Blair) called and the team was sending me to play in Saginaw. It was a big relief. I wasn't in the best frame of mind riding the pine like that. I was a 60 goal scorer the last season and I'd won the right to play up there, but they just weren't usin' me. I knew Saginaw was the best place to go and play."

The night of Rosie's return saw a near sell out crowd. The visiting Port Huron Wings must have thought that they'd stepped into a bee's nest. As game time neared, however, more rumors flooded the place. The only fact that seemed to be going around the place was that Rosie wasn't there yet. I was right in Zamboni alley waiting, watching and listening as the first period started. When Gears P.A. announcer Jerry Werle broadcast the changes to the starting lineup he stated "For the Saginaw Gears, add to your lineup Dennis Desrosiers." The fans erupted. As the period went on, the rumors grew- Rosie was sick and on a prescription, so he'd be in the building, but wouldn't play, Rosie had an injury (I'd heard three different versions within minutes of one another- an ankle, a wrist and a knee), Rosie missed his flight and would not be in until tomorrow, and the last and most rude of the rumors came when some "fan" came down from the concourse and said he'd heard from one of the cops that there had been a bad accident on the way from the airport and Rosie was in it. Then the "fan" just blended back into the crowded arena. It took my dad about 30 seconds to check with the police and trash that rumor.

There was the familiar squeak of the back door to Zamboni alley and in came Rosie flanked by Gus Patterson who had picked him up at Detroit Metro airport. Head-down Rosie walked toward the Gears dressing room. I think he had taken about four steps inside the building before the news of his arrival spread in chain-reaction through the crowd. To say that the place went nuts would be an understatement. People reached out toward him, fans screamed and shouted his name, two Saginaw police officers stepped into the wake behind him as Nick the stickboy opened the door and Rosie vanished into the dressing room. No one had to tell the players on the ice that Rosie had arrived the thunderous cheering and clapping said it all. As the door to the dressing room closed my dad said "Yep... he's home." which is what most of us were thinking.

There was only one one problem- one of those rumors was actually true- Rosie was indeed sick. He told me a little more than 37 years later, "I was sicker than a dog when I left New Haven. I had the flu real bad and I didn't expect to play." A series of snow storms had messed up the flights headed toward Saginaw and the Gears front office finally managed to get Rosie on a flight into Detroit. "Gus Patterson drove down and picked me up," Rosie explained, "but I was sick as a dog. I figured they wouldn't have me in the roster anyhow so it didn't make any difference. But when I got there and the way the place went nuts for me.... I said well I'm not on the roster and they (the team) said, oh no- you're on the roster the teams out there playin' shorthanded waitin' for ya'. How could I not play? So I went out there, as sick as I was I figured I wouldn't be too productive."

When the second period started, Rosie stepped onto the ice wearing number 14. Again the building erupted as the crowd cheered and clapped. It was a noise that went on for quite a while. They even cheered his first shift and every time Rosie took a shot for the rest of the game, every set of eyes in that arena were on it. Indeed the icing on the Saginaw fan's cake would be a Dennis Desrosiers goal. As always- Rosie did not let his fans down. At 7:52 of the third period, a Borden Smith slapshot was stopped dead by Wings goaltender Brian Cousineau who failed to clear the rebound and Rosie flipped the floundering puck easily into the net. The crowd went wild again. Before his career playing for the Gears came to an end 9 years later, Dennis Desrosiers would score another 214 goals and carry the Turner Cup around the ice. For now, at least, he was simply looking forward to getting over the flu.
Posted by Wes Oleszewski at 5:59 AM