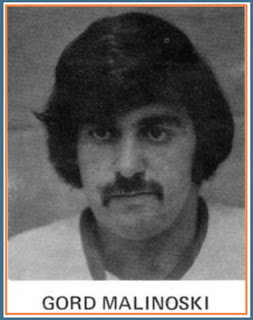 By the time that the Gears began to gather once more in the city of Saginaw a lot had changed. From my perspective, my folks had sold our house in Sheridan Park on Saginaw's east side and bought a new house in the town of Freeland. This was due to the fact that I was supposed to start Saginaw High in the fall of 73 and everyone was sure that a scrawny smart ass like me would get knifed within a week there. I found that the infection of Gears fanisum was everywhere in the Tri Cities- including Freeland. But, when all of us fans finally saw the Gears again, we saw a very different team. That evolution would continue into mid season and would turn out to be as favorable as my not getting knifed.

Returning from the inaugural season were names such as Tommy Thompson, Russ Friesen, Stu Irving, Marcel Comeau, Mike Hornby and Raynald Tessier- and that was it. Out of the 18 players who finished the first season, only 6 returned. In very short order, however, that number was down to 5 as Tessier was released to the Fort Wayne Komets. Wren Blair and Don Perry had gone shopping at the meat market and come up with some very tough beef to help fill the Gears bench. On the blue line, Doug Marit at six foot three, 205 pounds then Jerome Engele at six foot even, 197 pounds. Although by today's standards these guys would be average at best, by 1973 standards they were big. Out front the Gears added plenty of beef as well. Brian Bowles at six foot even and 185 pounds and Rejean Beaudoin at six foot even and 195 pounds plus Dave Cressman at six foot one inch and 180 pounds. Then for speed they added Jean Marie Nicol at five foot ten, 185 pounds, Jimmy Johnston at five foot eight 157 pounds and Pierre LeBlanc at five foot ten and 176 pounds. For stability and savvy among these kids they added hockey veteran Borden Smith who had been playing in the stitches leagues like the EHL since 1959. In goal, the Gears got two goaltenders at different points in their careers and going in two different directions. Sam Clegg was at the beginning of his pro. career and Jim Armstrong, who had been a pro. since 1959 was at the end of his. Armstrong, with his short, square haircut resembled the goalie you'd get with your marble hockey set, while Clegg made the bubblegum girls swoon in the absence of Tessier. Of course he had to share that role with Lowell Ostlund.

The biggest addition, however, was a stubby defensman who could easily punch his way through a brick and not break his stride skating. He had previously been with the Dayton Gems for a full five seasons and in the 1972-73 season had set a new penalty minutes record for the IHL at 375. In the IHL he was THE player that everyone loved to hate when the Gems came to town He was officially listed as Gord Malinoski, but would come to be know by all Gears fans as "Gordie." Some in Saginaw were stunned when the Gears traded the rights to Dennis Romanesky for Gordie Malinoski. But Romanesky retired from hockey at the start of the season while Malinoski would go on to play for the Gears for four seasons- Blair and Perry had indeed made a good trade deal. It only took about one game before the fans in Saginaw started to love this dark little killer. Muscle and mean, however, were not all there was to Gordie. He had plenty of blue line savvy and a shot from the point that I always expected to go right through a goaltender's body and end up in the net covered with entrails.

Still, there was one thing that was missing from this new Gears team. Missing was the one player who would soon be found to be the heart and soul of the Saginaw Gears- missing was Dennis Desrosiers.
Posted by Wes Oleszewski at 9:36 PM