"What's Wrong With The Gears?" 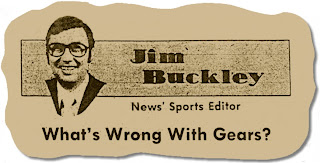 "What's Wrong With (the) Gears?" was the title of the story written by Sports Editor Jim Buckley that appeared in the sports section of the December 4th, 1973 Saginaw News. The Gears had, at that time, gone into a perceptible slump and everyone except for the most myopic members of the booster club saw it happening. The team's record stood at 9 wins, 13 losses and 1 tie- exactly the same as it had been the previous season at the same point on the calendar. Additionally, as Buckley typed out his comments the Gears had lost the last 5 games in a row and had only won 4 games in the entire month of November's 15 game schedule. To make matters worse, the Columbus Owls, who had received much of their talent in open-ended trades with Saginaw, now had a 13-9-1 record based largely on Gears lost talent.

Being a stone-cold sports reporter, Buckley did not pull any punches. He went after the number of Gears penalties and he went after Gordie Malinoski specifically. He pointed out that Gordie had drawn 144 minutes in penalties so far this season and if he kept up that pace he would have a total of 450 minutes before the season was over. In fact- Gordie ended the season with 333 minutes total- well short of his IHL record of 375 minutes in a season. Buckley quipped that "I understand that it's only a rumor that the gears are going to put a plush leather armchair in the penalty box so Gordie can spend his time in comfort." This, however, ignored the fact that his penalty record and rough play were the two reasons why Gordie was brought to the Gears in the first place. Now he was only doing what Wren Blair was paying him to do.

The article ends with a statement that because of the Gears slump Saginaw fans were "...being cheated." It was factual that the average attendance was averaging about the 4,300 per game only 4 of the Gears 9 wins had been on home ice. Still, no one was storming to the ticket office demanding a refund. So, although Buckley's article did not make the future or the present look good, the answer was "no" the fans were indeed not being cheated.

One part of the article that really rang true, however, was the hint that a change was in the works. Blair was not happy with things in Saginaw and likewise, neither was Don Perry. Looking at activity in the NHL, Buckley saw the North Stars sending tow player down to New Haven. He wondered in print it that could mean the return to Saginaw of Dennis Desrosiers. Indeed, the stage was set for Rosie's return to the gears.
Posted by Wes Oleszewski at 2:34 PM