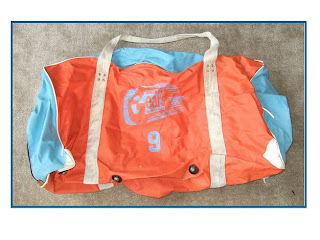 At the end of the 1975-76 season, Gunner tossed out several badly worn equipment bags. Shortly there after, while helping my dad in the Civic Center's Zamboni alley, I happened into the compactor room to throw away some trash and found the bags. Rummaging through them I found two that were not total wrecks- this one, which was Dave Westner's and another one who's owner I don't recall. Later I traded the second one back to Gunner in exchange for a jersey, but I kept this one because it has a good zipper. Today the bag resides on loan in the Saginaw Sports Hall of Fame as the Castle Museum.
Posted by Wes Oleszewski at 3:34 AM